We use our own cookies and third-party cookies to improve our services and analyse the browsing habits of our users. Continuing to browse our sites implies full acceptance of their use. You can change your cookie setting or get more information here

Which term is the correct one?

The most popular term has been permanent make-up, but in reality it is neither make-up nor permanent (fortunately!). Later the term micropigmentation was introduced, which we don't dislike so much, but the most correct term and the one we should use is Medical Dermopigmentation, because it must be carried out by medical personnel and because what we are actually doing is introducing pigments into the skin that will be reabsorbed over time. Therefore, also, the correct term would be semi-permanent make-up.

This procedure is based on using colours to solve both medical problems (vitiligo, scars, skin or mucous membrane defects, alopecia, etc.) and aesthetic issues (beautification of eyebrows, eyes, lips). In itself, the technique consists of introducing pigment granules into the dermis by multipuncture or tearing with very fine needles.

Is it the same?

In dermoblading the technique is by tearing, making small cuts in the skin at the same time as the desired pigment is introduced, simulating the finest hair. In dermopigmentation, the needle enters and exits the skin at high speed, making small dots at the same time as the pigment is introduced, forming stripes, shading and/or compacts.

Dermoblading reaches the most superficial layer (epidermis), while dermopigmentation reaches the deeper layers of the skin (dermis and epidermis).

In dermoblading, fine needles are used that form a kind of blade or scalpel on a support like a pen and in dermodigmentation, one or several needles attached to a dermograph are used.

In general, the duration of each treatment will depend on age, skin type, hormonal factors, possible medication taken, care taken and exposure to the outside world (sun, swimming pools, etc.). In any case, dermopigmentation usually lasts from 2 to 3 years and dermoblading from 6 months to a year.

What does dermoblading consist of?

It is essential to design the result we want to achieve beforehand, which is why a study and visagism (characteristics of the facial features of each patient) will always be carried out during the first visit. Furthermore, an allergy test is performed even though the pigments we use at Clínica Áureo are inorganic, minimising the possibility of an allergic reaction. The material used is disposable and single-use, complying with the strict sanitary and hygiene regulations.

Practically any anatomical area of the human body is susceptible to dermopigmentation, in each case the benefits or complications that may arise must be assessed. We will treat the eyebrow area, depending on the needs and facial characteristics of each patient. We will design the eyebrow according to the face and, if there is hair, respecting it as much as possible to make the most of it. We use a hair by hair technique to make it as natural and aesthetic as possible.

Eyebrow design is very important for a face, it gives it character and personality. The fact of accentuating the eyebrows more or marking them, especially in people who have alopecia, gives the face expressiveness and rejuvenation.

Photoprotection is absolutely necessary for maintaining the chosen tone, as well as careful hygiene of the treated area; and we advise applying something cold to the area. According to medical criteria, guidelines for antibiotics and anti-inflammatories can be provided.

The expected process, once dermoblading or microblading has been performed, consists of an increase in the tone chosen during the first week due to the creation of the scab, in the second week a decrease in tone is observed due to desquamation and, finally, in the third week the colour stabilises. For this reason, at Clínica Áureo we do not perform retouching until at least 30 days after the procedure.

Over time the pigments are reabsorbed, with an estimated duration that can vary between 6 months and 1 year.

More of our own dermoblading cases.

Who will assist you:
Know me more 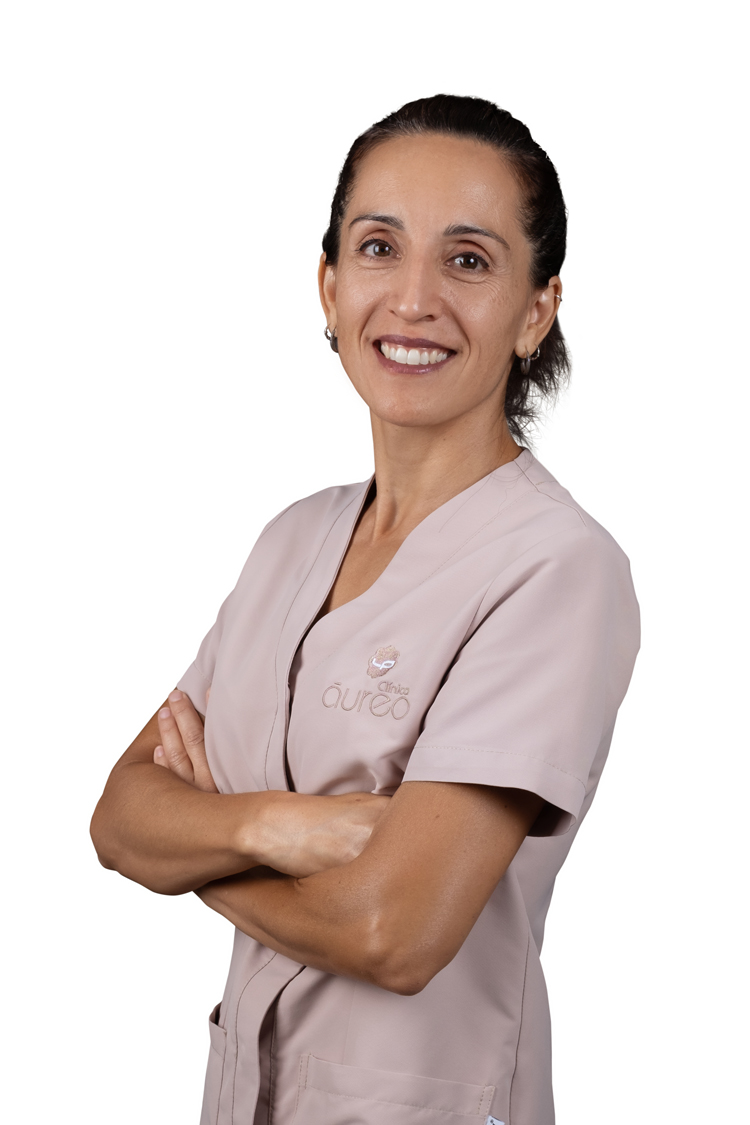